The VITO Project, is a series of free monthly screenings launched on Wednesday 21st January 2015 with a screening of the Celluloid Closet. The project was created in association with the Cinema Museum to promote dialogue between different generations of LGBTs. The series provides an alternative space for LGBTs of all ages to watch films and share ideas.

Read about our next screening HERE!

Videos of some of our post-screenings discussions are regularly uploaded on ReShape’s YouTube channel and can be watched here!

Like lots of good ideas, The VITO Project grew out of a conversation between a group of friends. What if, instead of just bemoaning the fact that younger members of our different communities don’t seem to have access to so many of the histories that have shaped and fuelled our older- generation lives, we got together and curated a series of evenings in which going to the movies and revisiting some key cinematic moments from those histories would be the reason for different generations of LGBT people to get together and meet and talk and share?

This original idea was developed by the team at ReShape and then provided with a home by the fabulous Cinema Museum, a truly unique venue devoted to keeping the spirit of pre- multiplex cinema alive in a hidden corner of the Elephant and Castle. In honour of his pioneering work in reclaiming and celebrating the queer history of cinema the project was named after VITO RUSSO, author of Celluloid Closet and a visionary AIDS activist, sadly long deceased – and a screening of his seminal documentary The Celluloid Closet was our launch event back in January 2015.

And since then, we have gone from strength to strength and VITO is now entering its second year.

Our screenings have attracted a capacity crowd and the programme has been deliberately eclectic, mixing classics with rarities, period pieces with slices of modern life and documentaries with juicy old melodramas. Trans, black, older, younger, lesbian and gay men’s lives have all been up there on the screen. The lively post- movie discussions have included contributions from voices as different as Stella Duffy, Amy Lame, Neil Bartlett, Ingo Cando, Campbell X, – amongst others, and of course from hundreds of punters young and old.

Word of the success of the evenings has been spreading through the social media, and we’ve been especially helped by the organisations whose members support us, publicising our screenings both in their listings, on their websites and just by word of mouth; BFI Flare: London LGBT Film Festival, 56 Dean St, QX Magazine, Gay’s the Word, Gay Mates and Buffs, ACT UP London, a Change of Scene, the Cara Trust, I-Base, UK-CAB, Positively UK, NAZ Project, Opening Doors London, Wotever, Gaydio & Broad Appeal Podcast

“The Vito Project is a monthly LGBT film-screening and discussion in London. It seems to be a surprisingly successful way to create an LGBTI event that brings a diverse group of people together for discussion, debate, and a few drinks”.

“Hi There, I just wanted to say well done on the Vito project on Wednesday. It was a very unique experience. The Crying Game is a great film. I only heard about it through a friend at THT. I also had never heard of the Cinema Museum before. What a find. I will definitely spread the word. I’ve seen Paris is Burning a few times but I will try and rally a group together for the next showing. I am one of those ‘older gays’ mentioned in your review. I’m not sure how you reach the younger ones. I have a couple of mates with gay son’s. They see to like to dress up a lot. I’ll encourage them to come along with their mates. All the best, x”
“My name’s X and I’m a PhD candidate in the English department at X university London. Unfortunately I’ve been out of town for the last two meetings of the VITO project, but was at the inaugural one in January and it was incredibly inspiring. I’ve never been to an event like it, and was overwhelmed by the feeling of intergenerational solidarity that it fostered.”
“I attended the screening of the Crying Game last night and really enjoyed it, thought the concept was brilliant …” 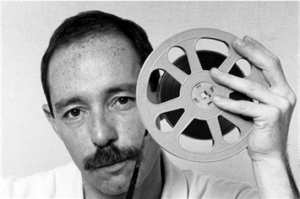 “I never once, not for a second, believed it was wrong to be gay.”

Vito Russo was a gay rights activist, a film historian and an author best known for his book, “The Celluloid Closet,” a groundbreaking chronicle of gays and lesbians in film.

A New York City native, Russo grew up in East Harlem and New Jersey. As a young boy, he would sneak into Manhattan to go to the movies. From an early age, Russo knew he was “different.” A cousin remembers him always talking about Rock Hudson rather than Ava Gardner.

After graduating from New York University, Russo joined the Gay Activists Alliance and archived old films at the Museum of Modern Art. In the early 1970s, he started research for “The Celluloid Closet” (1981), which entailed watching hundreds of films that included gay content and stereotypes. What originated as a lecture with film clips became one of the most informative books about gay people and pop culture.

Diagnosed with HIV in 1985, Russo was a frequent protestor with ACT UP. In 1986, Russo lost his longtime partner, Jeffrey Sevcik, to AIDS. Outraged by the media’s inadequate and inaccurate coverage of the pandemic, Russo cofounded GLAAD, an organization that monitors LGBT representation in the media. In his memory, GLAAD created the Vito Russo Media Award to recognize out LGBT media professionals who have made a significant difference promoting equality. Russo appeared in the 1989 Academy Award-winning documentary, “Common Threads: Stories from the Quilt,” about the life and death of Sevcik and the quilt Russo made for him. A year later, Russo died from AIDS-related complications.

In 1996, “The Celluloid Closet” was made into a documentary film by Academy Award winners Rob Epstein and Jeffrey Frieman and co-produced and narrated by Lily Tomlin. In 2012, “Vito,” a film about Russo’s life by Jeffrey Shwarz premiered on HBO.